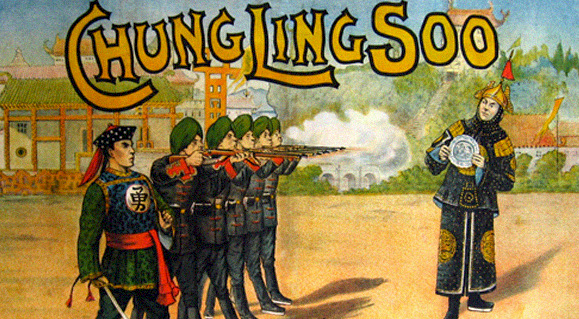 The 10 Most Shocking Onstage Deaths of All Time

People watched as performers died right in front of their eyes.

It may come as a surprise, but so many performers have died onstage that authorsJeff Abraham and Burt Kearns had to narrow the list to "the most shocking, bizarre and historic" for their sensational new book. The Show Won't Go On.  Among the more than two hundred onstage bucket kickings they cover in the book, there are some that stand out as genuine shockeroos.

The comic actor was such a hit in the play "The Twin Sister" that on April 11, 1904, the audience at theMunicipal Theatre in Nimptsh, Poland, brought him out for six curtain calls!  On the final curtain-raising, Hasda pulled outa revolver, placed it to his temple, and in front of the entire audience, blew out his brains. The producers said he was upset that an actress in the production had rejected his marriage proposal.

Thomas Maccarte, aka Massarti, kept working even after losing his upper left appendage when a lion tore it off.  On January 3, 1872, he calmed his nerves with a few stiff drinks and then stepped into a cage with five lions. Then he slipped, and before the eyes of 500 spectators, many of them children, was eaten, scalped and torn limb from surviving limb.

The popular stage mentalist was afflicted with catalepsy, a condition that often led him to have a seizure onstage and fall into deathlike trance. Bishop even carried note in his jacket pocket, warning that he wasn't dead and would soon wake up. When he collapsed onstage at the Lambs Club in Manhattan on May 12,1889, doctors apparently did not read the note.  Bishop was carried to a funeral home, where they cut open his head and removed his brain.

The mysterious Chinese magician was accidentally shot fatally on March 23, 1918, while performing his signature"bullet catch" trick at London's Wood Green Empire Theatre.  When Chung exclaimed, "Oh my god, something's happened! Lower the curtain!," the audience was stunned -- not so much that he was bleeding, but that he could speak English!  It was later revealed that the conjurer was actually William Ellsworth Robinson, a guy of Scottish descent from Westchester, New York.

Great Britain's beloved comedy magician collapsed and died on April 15, 1984, on the television variety show, Live From Her Majesty's. After Cooper fell back against the stage curtain, gasping for air, the director kept the camera focused on him for forty-nine long seconds before cutting to commercial, allowing millions of viewers to watch Tommy Cooper die on live television.

The guitar hero from the heavy metal band Pantera was rocking with his new group, Damageplan, at the Alrosa Villa club in Columbus, Ohio on December 8, 2004, when a deranged ex-Marine ran onto the stage and shot him in the head. The gunman killed three others before a policeman blasted him with a shotgun. America might not need the marine corps, but we sure do need police.

The nineteen-year old from Anchorage, Alaska played a song called "Sorry for All the Mess" on Open Mic Night at the Strictly OrganicCoffee Company in Bend, Oregon on April 11, 2011. Then he took out a knife with a six-inch blade and plunged it repeatedly into his chest.  At first the audience clapped and cheered, believing they were witnessing a piece of performance art.

The French acrobat and aerialist plummeted a hundred feet into a pit during the final battle scene of the Cirque du Soleil spectacle Kà at theMGM Grand in Las Vegas on June 29, 2013.  Some in the crowd thought her fall was part of the choreography --until everyone heard screams and Sasoun’s anguished moans. She was the first Cirque performer to die from an onstage accident.

The up-and-coming French folk singer was in the middle of a concert in Goudron on July 19, 2017, when she stepped on a faulty electrical device and was electrocuted. Weldens might have survived, if not for her trademark style: she always performed barefoot.

The singer and dancer with Orquesta Super Hollywood was killed onstage in Las Berlanas, Spain on August31, 2019, when a  pyrotechnic rocket shot out of control and exploded in her abdomen.

The Show Won't Go On: